In the year of 1974, I was taking our daughter, Janet, to Confirmation Instruction at Trinity Lutheran in Springfield.

My Brother-in-law, Jerome Newton was Associate Pastor there and C.W. Heilman was Pastor.

I discussed with Jerry and my sister Annette my desire to try to start a church in Bolivar. Jerry followed up on this by talking to Pastor Heilman and he said he had heard there were 2 other Lutheran Families in Bolivar, the Pruitts and the Selveys.

He than began to set things in order, and with my help a meeting was held at Trinity, with some of their members interested in helping us, and the Ankroms, Selveys and Pruitts.

Several places in Bolivar were considered to have services and the Selveys volunteered their home, and because of finances etc. it was decided to accept their invitation.

Rev. Heilman brought members from Trinity each Sunday night and Leslie Gunderson and others came to play the piano and help otherwise. One couple was very faithful in attendance and monetary help. They were Bob and Nellie Osterloh, relatives of mine. Bob has since deceased, but Nellie is still serving at Trinity.

Many others helped. We wanted to have more space, and some time later we moved into an older home on West Broadway in Bolivar. Other families joined us and we started to grow.

Plans were made with the help of a $10,000.00 Grant from L.W.M.L. and money from church extension fund, we bought around 18 acres on Aldrich Road to build a new Church.

On Sept.2Oth, 1980 the marriage of our daughter Janet to Norman Nelson was the first service in the new church. My sister Hazel Lee and Brother, Warren Davis, Janetâ€™s Sponsors paid for the stained glass window in the front of the church. Pastor Clarence Stenbeck had designed it, and David Burns, then Supt. of Schools at Fair Play, had made it. It was installed Sat. morning and the wedding was at 7:00 P.M. that night. We had to borrow chairs from Fair Play School because the pews were delayed, but everything went well.

History after that is pretty well known, we have had other wonderful Pastors and members who have attributed to our growth. We are especially Thankful to Al and Ruby Kelderhouse for their generous legacy to our Church which makes it possible to have our Mortgage Burning Ceremony today, June 1st, 1997.

Outreach of the Month 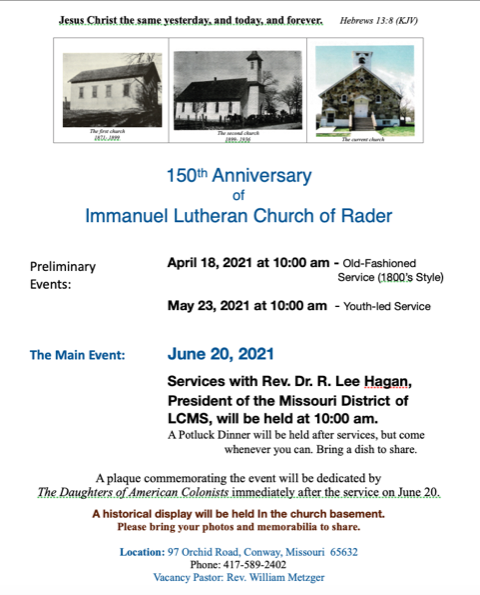